“You can say Expert Treasure-hunter instead of Burglar if you like. Some of them do. It’s all the same to us.”

Archaeology is a source of wisdom, and as Gary Momber likes to say, the cultural heritage is  a source of self-esteem and peace of mind.

The submerged cultural heritage is invisible and its fragility is often difficult to explain. Looters, and especially treasure hunters have destroyed the best part of all the early modern shipwrecks found, and this predatory practice has not been eradicated from the planet yet.

In a 2012 paper titled “Honor Amongst Thieves: Organized Crime and the Illicit Antiquities Trade,” Kimberly Alderman explains how  “The illicit antiquities
trade has been linked to organized criminal activities including money
laundering, extortion, the drug and arms trades, terrorism and insurgency, and slavery.” Moreover, the antiquities market is protected by an international  wealthy class that often shows a disgraceful contempt for the law and the common interest.

This website is an attempt to share the last 20 years of research in the J. Richard Steffy Ship Reconstruction Laboratory and the Center for the Study of Digital Libraries at Texas A&M University. The protection of the underwater cultural heritage is not only our first concern, but perhaps the most important, given the growing bargaining power of the wealthy class in the present period.

Treasure hunters have often been successful at confusing and misinforming the general public, politicians, and journalists, on the nature of their business. Adopting euphemistic labels, such as “commercial archaeology,” or arguing that it is possible to do serious archaeology and sell or deaccess artifacts only after the entire excavation is over, treasure hunters have managed to destroy countless archaeological sites using incomparably more destructive means than looters can even dream of using. 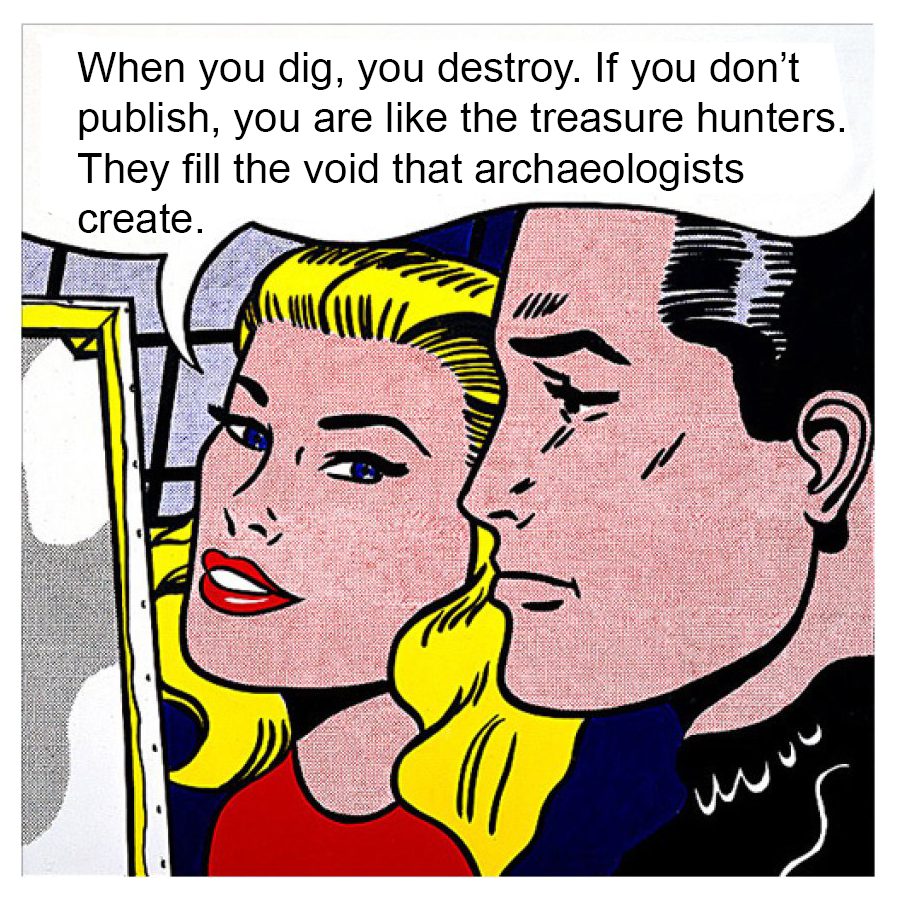 Moreover, the public relations campaigns conducted by treasure hunters near government officials are only possible because archaeologists have traditionally been secretive and elitist, failing to share or explain what they do to the public, and sometimes failing to even address the most elementary reasons why archaeology matters.

Archaeology was a hobby of the wealthy and, being independently wealthy, or sponsored by wealthy patrons, many archaeologists never felt the need to explain the social value of archaeology, the importance of the past in everybody’s life, and the nature of their work, constructing and deconstructing narratives about who we are and where we come from.

Before starting a discussion about the  social importance of archaeology and the role of the social media in creating dissemination environments that can be reliable, or inaccurate , deceptive, or outright insane, let us clarify four important basic facts.

Treasure Hunting has nothing to do with Archaeology

Archaeology is the careful and patient study of contexts where artifacts have been preserved. Archaeological projects must be carried our slowly and thoughtfully. All data must be shared and the intrusive process must be public. The recovery of artifacts from archaeological sites is not archaeology.

Treasure Hunting is about exploiting investors, not recovering treasures

A sucker is born every minute is the motto of all treasure hunters, and they seem to believe that it is their moral obligation to separate the fools from their money. The history of treasure hunting has not yet been written, but countless verifiable stories illustrate their business in an eloquent way: the treasure is always in the pockets of the investors.

Treasure hunters destroy archaeological sites in the same way the Taliban or the Daesh have destroyed the Afghan Buddha statues of the ruins of Palmyra.  The only difference is that they do not film themselves doing it. In fact, secrecy and plausible deniability are their core acting principles. After more than half a century of organized treasure hunting, it is very difficult to find images that illustrate with justice what they do.

When discussing the role of archaeologists in treasure hunting, it is often repeated that a brain surgeon hitting a patient’s head with a baseball bat is not performing brain surgery. Treasure hunting is a for-profit activity and it is only logical that treasure hunters focus on the relation between the cost of recovering artifacts and their market value.

Bass, George, 1990. “After the Diving is Over,” T. Carrel, ed., Proceedings of the Annual Conference of the Society for Historical Archaeology.

Kleeberg, John, 2013. “A Critique of the Fundamentals of the ‘Commercial Salvage’ Modelof the Excavation of Historic Shipwrecks: An Examination of the Profitability of Six Commercial Salvage Ventures,” Technical Briefs in Historical Archaeology 7: 19–30.

Throckmorton, Peter, 1990. “The World’s Worse Investment,” T. Carrel, ed., Proceedings of the Annual Conference of the Society for Historical Archaeology.