During the undergraduate thesis of the Universidad Externado de Colombia entitled “Methodological Proposal for the Construction of a Matrix of Archaeological and Historical Indicators for the Identification of Shipwrecks: The Case of a Colonial Ship located in the Bocachica Canal (Cartagena de Indias)” a dissemination component was structured and developed which was aimed at the diffusion of information concerning the entire study of a shipwreck and the archaeological potential of the south of the island of Tierrabomba. In this way, a naval architecture workshop was structured focused, in general terms, on the recognition of the construction techniques used historically in the great Iberian shipyards and how the boats built in them rest in different submerged environments.

The workshop was aimed at different students of a “Ribera Carpentry” course taught by the Escuela Taller de Cartagena de Indias (ETCAR) at Fort San Fernando de Bocachica, and the session was supported by the professor in charge of the course Ronel Pacheco. Likewise, the horizontal discussions that arose during and after the shipbuilding workshop were accompanied by Lorena Palacio from the Escuela Taller and Josué Guzmán from the Subdirección de Arqueología Subacuática (SAS) of the Instituto Nacional de Antropología e Historia (INAH) of Mexico. In this way, there were different perspectives on the socio-historical dynamics of the Bay of Cartagena de Indias and, particularly, of the Bocachica district.

In this order of ideas, the workshop consisted in the construction of a scale boat by laser cut 3mm MDF sheets which were assembled by laces that followed the basic and fundamental principles of historical naval architecture. The objective of building the boat was to propose a critical reflection on various topics such as the principles of colonial shipbuilding, the importance of archaeological science as an agent of change and the relevance of dissemination in scientific research interested in the Nautical Space and all over the Sea. All this, in short, was focused on the resignification of the value of the cultural heritage present on the island and, particularly, towards those boats built that have allowed the connection of multiple spaces around the globe.

Thus, the importance of incorporating communities in research is highlighted in the sense that the integration of their perspectives, in a horizontal dialogue, allows a better understanding of the socio-historical trajectory of a certain space, as well as of the cultural elements that it’s made of. On the other hand, it is possible to critically reflect on the influence of past events on the present and how this is possible to understand thanks to the analysis of multiple social sciences such as archaeology. Consequently, these types of initiatives are the ones that allow a successful asset activation by and for local communities. Those that manage not only to signify the cultural heritage (maritime, coastal and underwater) of their regions, but also to value and protect it in their daily interaction with such particular and vulnerable contexts. 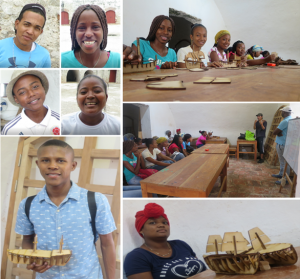