Algeria is a country rich in cultural and archaeological heritage, more than 370 classified sites, including 7 in the world heritage list (Source OGEBC 2018).  Counting among these sites is Caesarea in Mauretania (currently Cherchell) which was the capital of a Roman province in north Africa and extended to the Atlantic Ocean. During the regency of Algiers this country also dominated over a large part of the Mediterranean. Algeria, which has a great archaeological potential, has an immense potential in underwater archaeological heritage, perhaps richer, and waiting impatiently to be discovered and studied.

However, like so many other countries around the world, Algeria doesn’t have yet an inventory of its underwater archaeological sites. Certainly, a few sites are known by divers, but scientific explorations and researches have been very rare (Khellaf 2016).

The first scientific explorations carried out by researchers in the field of underwater archaeology began in 1968 (Ferdi 2004).

An English archaeological mission made up of two divers, York and Davidson, carried out a series of dives all along the Algerian coast to seek either deposits coming from ancient wrecks or possible vestiges of constructions which were to serve as shelters or ports (York and Davidson, 1968). The two divers were equipped with modern prospecting equipment at that time; an ” inshore graphic model ferrographer ” using ultrasonic waves and various diving devices (Bouchnaki 1970).

It was only in 2005 that scientific research operations in underwater archaeology were updated in Algeria. A first unique operation of its kind enabled the discovery of the Sphinx sinking site (ship of the Royal French Navy, stranded at Cap Matifou, east of Algiers) as well as the location of an undated sinking site, a small coaster carrying ten grindstones, weighing approximately 800 kg each, probably intended for oil mills. Both these sites were located at El Marsa, very close to Algiers (Guerout, 2016).

It is within the framework of a project of the European Program Euromed Heritage II “The navigation of knowledge – Network of historic arsenals of the Mediterranean”  under the responsibility of the University of Malta and UNESCO that Algerian trainees were able to participate in a training site in underwater archaeology techniques implemented by the Research Group in Naval Archaeology (GRAN), with the administrative and financial support of the Algerian Ministry of Culture and the contribution of the Algerian Navy (Guerout, 2016) .

A magnetid survey was also undertaken by GRAN, in the area of the landing of the armada of Charles V in 1541.

Unfortunately this last operation marked the end of all scientific research activities related to underwater archaeology in Algeria for several years .

We should also note the effort of the new National Maritime Museum in Algiers, which created a research department in underwater archaeology in 2015 and which, for this, trained a team of five diving archaeologists. This team has already carried out several archaeological operations to survey and identify several sites declared by amateur divers.

In 2017, a group of diving archaeologists and academics created, under the chairmanship of Dr. Khellaf Rafik, the national commission of underwater archaeology, within the Algerian federation of rescue, first aid and underwater activities. This commission primarily aimed to the awareness to the declarations of fortuitous discoveries and the identification and protection of underwater cultural heritage.

A year later, the same team under the direction of Rafik Khellaf, registered a research project at the national research center in archaeology CNRA, under the theme of “Coastal and Maritime Archaeology “. The first archaeological missions began at Tipaza and Cherchell. The results of a year of work were published in the second edition of the CNRA journal “Algerian Archaeology News” dedicated to underwater archaeology, where three sites were studied and documented.

Finally, note that in April 2018, Pr. Hamoum, head officer of CNRA, attended the ninth meeting of the “Scientific and Technical Advisory Body (STAB)” of the 2001 UNESCO Convention on the Protection of the Underwater Cultural Heritage, he was elected member of the scientific and technical council as rapporteur. A year later, in June 2019, he was unanimously elected President of STAB.

In October 2019, Algeria hosts the first extraordinary STAB meeting of the 2001 convention, under the chairmanship of Pr. Hamoum. 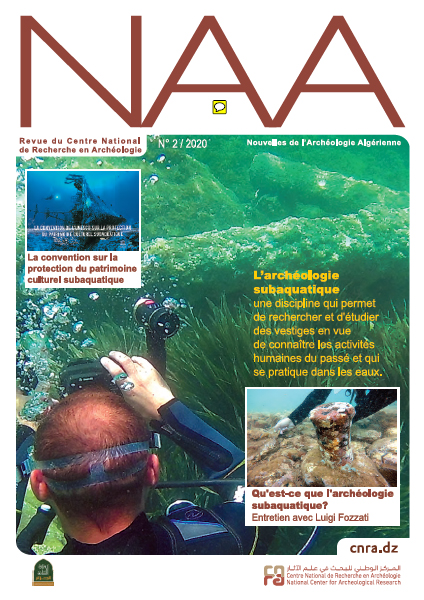 Several submerged constructions were implemented as part of the construction of a commercial port infrastructure on the coast of the towns of Cherchell and El Hamdania. These constructions amounted to 24 berths whose area, including the repective basin and piers, extends over more than 200 hectares. These structures will make up the largest port in Algeria.

In 2018 and 2019, archaeological surveys of the area impacted revealed a site with an accumulation of iron guns that was mapped and studied.

This project established a methodology of approach for future projects and was timely published, standing as an example of good practice for the international community.